02 Apr Is Radon a Problem in Colorado Springs?

Posted at 14:31h in Blog by Tricia Cardos 0 Comments

Is Radon a Problem in Colorado Springs?

Radon is an odorless, tasteless, invisible gas that can cause lung cancer. The more radon you breathe in, the higher your risk of getting lung cancer. Radon is the second leading cause of lung cancer after smoking, and before second-hand smoke. In fact, radon is linked to over 21,000 lung cancer deaths per year across the country, according to the EPA.

Unfortunately, radon has a tendency to collect in homes in Colorado Springs and elsewhere in our state. As it is heavier than the usual air we breathe, radon won’t leave your home unless you have a Radon Mitigation System installed.

Colorado Springs, like the whole county of El Paso, has average indoor radon levels of 4.9 to 9 pCi/L. This is almost double the 4.0 pCi/l “level for action” from the EPA in which they strongly recommend homeowners install Radon Mitigation Systems. Your chances of getting lung cancer from this level of radon are five times greater than your chances of dying in a car crash.

Two of the counties we border, Teller and Pueblo, have even higher average levels of indoor radon, at 10-19.9 pCi/L. Why does our area have such high levels of this dangerous gas?

Why is Radon Found in Colorado Springs?

Uranium, a radioactive metal, releases radon gas as it decays. Uranium is found naturally throughout Colorado as part of the Uravan mineral belt. While this large deposit is, in part, in western Colorado, smaller amounts of uranium are scatted throughout our state.

Several mines in Colorado have been mining this belt since the late nineteenth century, mostly because it also contains vanadium, a metal that can be used to increase the strength of steel. When uranium became useful after World War 2, we began mining for the uranium itself.

Whether or not they are mined, the uranium deposits in the soil of Colorado Springs will slowly release radon gas. When this happens outside, it’s not as serious of a concern, as the gas slowly dissipates and spreads out, resulting in low overall radon levels of roughly 1.3 pCi/L. That is, so long as you’re not in an actual mining site or near a uranium tailings site.

However, radon gas can seep up from the ground into our homes, through cracks in the foundation, through the water supply, or other entry points. Once in our homes, the radon gas can’t dissipate easily as it’s too heavy to overcome the rest of the air in our house. Instead, it gathers in the lowest points of our home, whether that’s a basement or the cold cellar, where we can breathe it in.

How Does Radon Effect the Colorado Springs Real Estate Market?

Radon affects the real estate market because most of our homes were built before we had Radon Mitigation Systems. We didn’t take the threat of radon seriously until recently. In the 1950s, research began looking at why miners tended to die of cancer. Regulations to limit radioactive exposure for miners were developed in the 1960s.

Still, no one noticed that radon could collect to dangerous levels in homes until 1985. In 1998 a study demonstrated that lung cancer could be caused by exposure to radon in homes. It wasn’t until 2008 that the first state, Illinois, mandated that new homes be built with radon-resistant techniques. Delaware, Maine, and Michigan all have laws about installing Radon Mitigation Systems in new homes. However, it still is not the law in Colorado Springs that new homes have these safety features.

Therefore, homebuyers and homeowners are increasingly concerned about buying a home with low levels of radon, especially as awareness to radon and its threat becomes more widespread. It is now common for buyers to insist that homeowners test their home for radon and install a Radon Mitigation System before the new owners move in.

There can be some debate about who should pay for this system, but homeowners who refuse to install one could see significantly less interest in their home. Some buyers do not want to take the risk of exposing themselves to the gas as they move in and wait for a radon mitigation company to install the system.

Not only for your family’s safety but to protect the value of your home, installing a Radon Mitigation System is a wise idea. 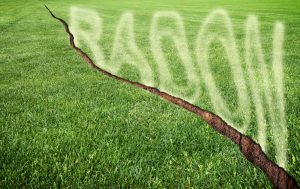 What Can You Do About Radon?

If you live in Colorado Springs, the first thing you should do is get a radon test kit.

Using the kit is simple; all you do is put the sampler in the lowest possible livable space of your home. It reacts to radon, and the third-party lab will process the charcoal test to determine how much radon is in your home based on the air sample collected.

If your radon test comes back at or above 4.0 pCi/L, the EPA recommends that you have a radon professional install a Radon Mitigation System. These systems can reduce the radon levels in your home by up to 99 percent, reducing your lung cancer risk and making buyers feel more secure about their purchase.

The system includes piping and a radon fan to mitigate the gas from the soil underneath the home. This is not a “do-it-yourself” kind of home renovation! Without a proper pipe system to release the gas, the radon won’t be rerouted and dispersed correctly.

Besides, when you get a Radon Mitigation System installed from us we’ll also provide a follow-up test so you can be sure your home has acceptable levels of radon.